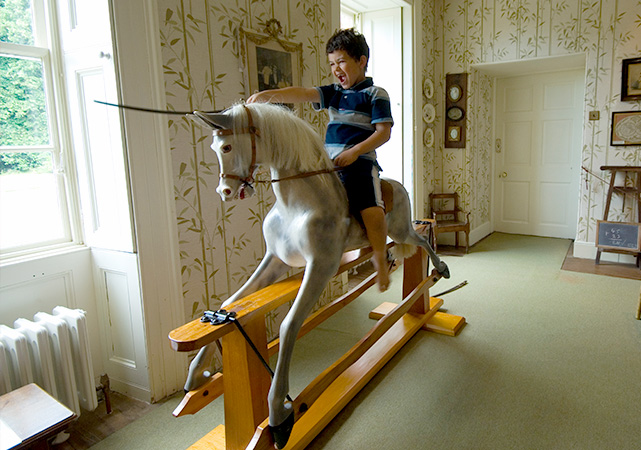 The Victorian Nursery would originally have been upstairs. Now on display downstairs, this room is very popular with our younger visitors, including school parties. This room was once the kitchen. The stairwell of the original stairs, which were against the back wall, can still be seen.

To understand life in the Georgian and Victorian nursery, we must remember that, in many country houses, the young children lived quite apart from their parents. Their lives ran to a strict routine, ordered by nurses and governesses. They would be produced once a day to meet their parents for about an hour.

At Mirehouse, some of the boys were sent to boarding school at the age of about 12, but the girls were always educated at home. It was not until 1891 that universal elementary education was established. Before then it was only the wealthy or the fortunate who had even a basic education. The 19th century was a period of educational reform and of great advances in knowledge. For example, the globe of 1855 shows the tremendous discoveries made since the 'Map of the World' of 1790 was drawn.

The small children had few toys, which were often educational. Time devoted by modern children to the television would have been passed in endless parlour games, such as 'Railroad Adventures' of 1840, which gives a vivid picture of the hazards of early railway travel. The modern 'music centre' was represented by the barrel-organ of 1810.

Despite the often severe governesses, Mirehouse Schoolroom was not entirely humourless. Much time was spent in composing parodies, especially of Wordsworth. And there were endless riddles, though they may not seem very funny to the modern reader:

Q. When is it dangerous to walk in the fields?
A. When the hedges are shooting!