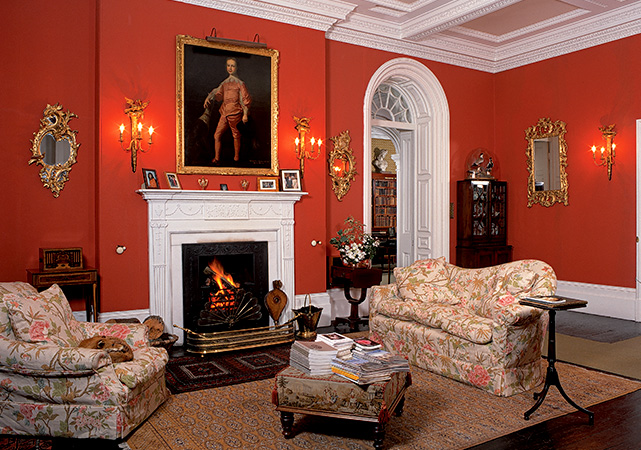 The colour scheme for this beautiful room, added on in 1851, was taken from the portrait over the fireplace fondly known to the family as “pink boy”. He was an earlier John Spedding of Armathwaite Hall who died young and the artist, Thomas Hudson, was the master of Sir Joshua Reynolds.

On either side of the large bay window are portraits by George Romney of Josias and Maria Morley, Yorkshire ancestors. John Constable was a friend of the family both in Suffolk, where John Spedding took his sons to Dr Malkin's school in Bury St Edmunds, and at Hampstead, where he was a neighbour of John Spedding's brother Anthony. Constable's small oil painting of Heath House, where Anthony lived, is on display in this room.

Adjacent to the Music Room, the Little Drawing Room contains a fascinating collection of family military and other memorabilia, including a particular Burmese collection.  This room was generally used as the private room of the ladies of the House, particularly in the summer. Some of their sewing-boxes and china are kept here as well as early photographs of members of the family and staff.

Several members of the family have served in the army, and their military careers can be traced through their medals. A less martial figure is the portrait of John James Spedding (1856-1909) great-great-grandfather of the present owner. He commanded, at the same time, both the Border Regiment Rifle Volunteers and the Westmorland and Cumberland Yeomanry. When asked with which regiment he would go to war, he replied that the possibility of going to war had never occurred to him!