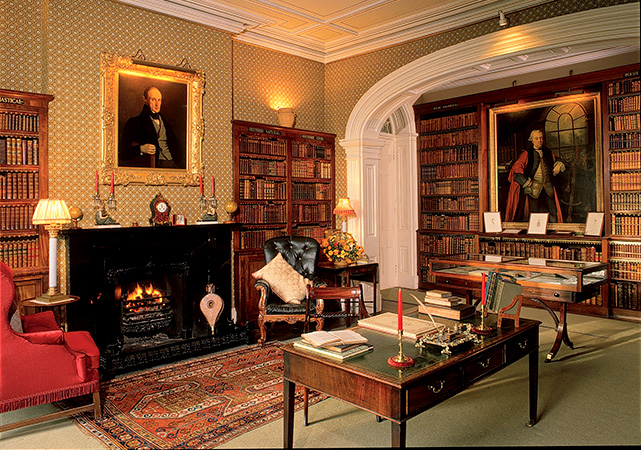 There are those who would fain have that library filled again with the voices of old time. Tennyson's deep-chested tones, FitzGerald's laugh, Monckton-Milne's wit. Carlyle's strong Northern brogue, James Spedding's dignified speech, and Tom Spedding's humour.

- From 'The Literary Associations of the English Lakes', Canon H.D. Rawnsley

Over the fireplace hangs Samuel Laurence's portrait of Thomas Story Spedding (1800-70), James's elder brother. After a promising career at Cambridge, he decided to devote his life to local interests in Cumberland, as a landowner, magistrate and, in 1855, High Sheriff. It was still possible at that time to be in touch with new developments in every field of knowledge.

One of his closest friends, Thomas Carlyle (1795-1881), was a regular visitor to Mirehouse, as well as being a close friend of James in London. It was convenient for Carlyle to call, on his way to his Scottish home at Ecclefechan, Dumfriesshire, upon his 'kind friend who lives sheltered about the rock of Skiddaw', 'Dear hospitable Spedding', 'the Genius of the hills'. Carlyle was introduced to his biographer James Anthony Froude by James Spedding. Froude was not only first cousin to Thomas and James Spedding but also Tom's brother-in-law, Froude's sister Phyllis being Tom's first wife.

When Tom Spedding died in 1870, Carlyle wrote to James: 'I feel to have lost one of the truest hearted friends I ever had, the like of whom I have not now left, or shall ever see again; a man of sterling probity in its gentlest shape. Seldom have I known a human soul gravitating more steadily towards the true and good in all things'.